Do you know that paintings by Suzi Nassif endorse several women? You may think that she can relate to women because she is a woman herself? It is a fine myth but not the whole story. The beautiful Suzi Nassif paintings are the best pieces of art work that ever portrayed women strengths. She has painted women who have inspired her with their strengths. Read on to know more…

Art by Nassif is rich in meaning as it conveys different women in artworks such as Hajar, The Empress, La Boheme, Aida, Lady D, Lizzie Petra and many more. The artist has a way with which she reveals the strength of a woman. She strongly believes in women empowerment.

While there’s no uncertainty some of them are world’s most prominent fine arts, in Suzi Nassif paintings you can see how she beautiful paints her mother Aida. Suzi believes that her mother was the only one who led her to the success and the reason behind her fame. She is inspired firstly from her mother because she was the independent lady. Her portrait named Aida is actually revealing her mother’s powerful personality.

Suzi Nassif’s acrylic paintings of the women’s show her love for their success that how they went through their lives but never failed. During her exhibition in Japan, she connected with their local culture and presented the majestic image of a Japanese queen through her painting Empress. The portrait is very ethnic and distinct.

Suzi famous artist paintings such as Fridalism and Fridiary. Frida is inspiring as she struggled a lot and Suzi admires her for her strength and creativity. Frida’s paintings regularly said a lot of the agony and disaster she endured for the duration of her life, first in the wake of being struck by a transport at 18 years old that left her body in shambles and made her persevere through in excess of 30 medical procedures and having survived polio. Frida’s ability was making dazzling Mexican society artistry, an enthusiasm that helped her express her encounters throughout everyday life. Truth be told, it was said by one faultfinder that Frida’s works of art were basically her history.

The portrait of Hajar the Dream Catcher by Suzi Nassif also highlights the strength of Hajar through struggles and her defiance. Suzi Nassif desires to express her feelings by portraying these known successful women. Most likely, Cleopatra was also the lady of demonstration from whom Suzi Nassif was inspired and want her audience to know more about from her paintings. Cleopatra is a standout amongst the most scandalous ladies ever. 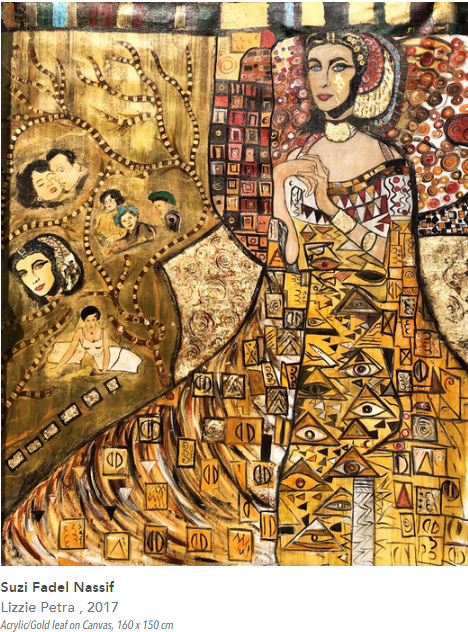 She defeated nations and men. Cleopatra was the last sovereign of the Macedonian tradition. She had a dream to end up a free ruler over Egypt. With this vision, she set out to do things nobody else had. Cleopatra turned into a living legend and a legend for ages thereafter. Since her opportunity, there have been none very like that of Cleopatra, Queen of Egypt. Suzi has portrayed her as Lizzie Petra.

Let’s await more women who will show up in Suzi’s portraits in future, who knows your next super star is the super woman in her art.