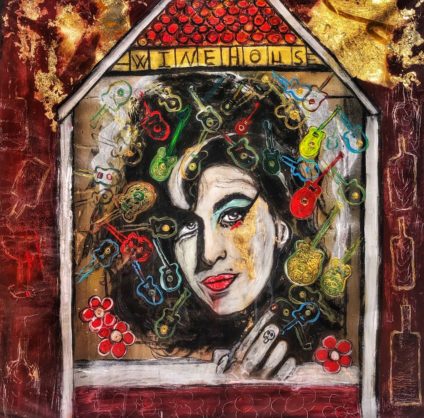 It is no secret that Amy Winehouse was a charming and talented musician who lived a troubled kind of life. She died at a young age of just 27 years. She was found dead in her residence in London. Before her untimely death she was struggling with alcohol and drug addiction as well as intense depression. At her death, her fans all over the world deeply grieved. She was a charming young talented celebrity but her life was unceremoniously cut short just like that.

In the year 2003, she sung in her first album her destructive behavior which obviously she wasn’t amused with. She claimed, “My destructive side has grown a mile wide.” Amy Winehouse had an appealing characteristic of vitality which was clearly visible in most of her electric performances. Amy was loved by many fans from all over the world including the renowned artist Suzi Nassif who is known for painting this beautiful acrylic on canvas painting of Winehouse. The portrait is a true surreal art piece as it shows Amy in a frame of wine suggesting her alcohol dependence that ended her life.

Amy was a rebellious teenager when growing up at just 14 years she was expelled from the Sylvia Young Theatre School. She’d later confess to people that when she was only 15, her parent realized she would do whatever she wanted and that was really what it was.

Indeed music ran in the family and her father loved jazz music something which inspired to music herself. She had a stint at the Brit School which is an influential UK stage school. It is from here that her projection to fame came about and in the year 2003, she released her debut album ‘Frank’, at the age of 19 years.

Amy’s song ‘Frank’ was nominated for the Mercury Prize and it became a chart success. Although her second album ‘Back to Black’ in 2006 was the actual hit that made her to get worldwide recognition.

Be the first to review “WINEHOUSE” Cancel reply