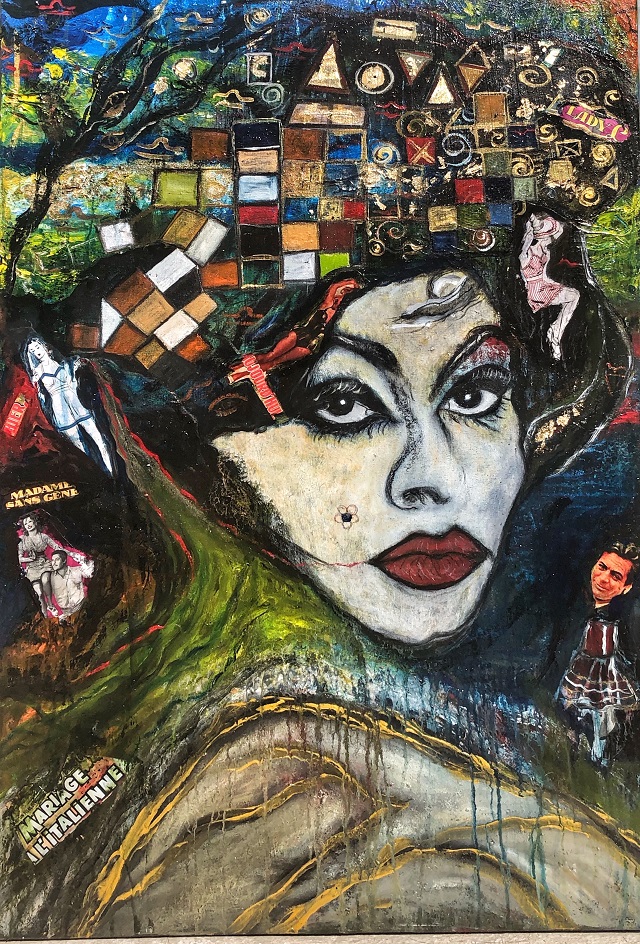 Suzi Nassif interprets the beauty of Sophia Loren … inspired by her elegance and enchanting beauty the artist states, “On canvas is the collage of Sophia Loren swathed in fragments of her existence. Contrast of bright and dark hues of color ride along hidden imagery of silhouttes and faces that cover a halo of a life palette lived through its colors”. The portrait presents the versatility of Suzi’s art that renders her among most admired pop art artists of the century.

Get to know Sophia Loren as painted by Suzi Nassif

Sophia world, the pop art painting, presents elegance and timeless beauty as painted by Suzi Nassif one of the best pop art artists.

She spoke simple but inspiring words. For instance, “Nothing makes a woman more beautiful than the belief that she is beautiful”.  She was her own source of power.

Released her own eyeglasses and perfume

Sophia’s first perfume production was a combination of roses and jasmine. Ironically, Loren became the first female celeb to own her own perfume. Besides the perfume, she ventured into eyeglasses by collaborating with Zyloware. Eyeglasses brands include frames, varied shapes, and colors. The eyeglasses are top-selling brands for women over 40.

Sophia is considered one of the most beautiful women in history

At the age of 14, she blossomed from a frail poor girl to a pretty woman. She enrolled for a beauty competition and won cash award and wallpaper for her grandparent’s living room.

Grew up in poverty

She says her biggest disadvantage in life was being wise but born in poverty. She was shy, thin, and unattractive girls. During World War II, sickness, poverty, and starvation were paramount.

Sophia has earned international awards in the film industry from her acting career. Both mother and daughter were hired as extras for the film Quo Vadis. Sophia secured work modeling for Fumetti Magazine that used real photographs. The popularity of Fumetti created demand for Sophia’s role in the magazine. She took drama lessons to improve her acting career.

Loren wrote a book with 200+ recipes like a casual chat with her in her kitchen. She wrote the book while having the best rest due to pregnancy in 1968 at the Geneva Hotel Continental. The recipes included childhood memories and recipes from her travels. The cookbook is not only inspiring but also full of love.

Johnny Hallyday was a French rock star. He was successful although his works remained in the French language. He was a hit with the Frenchmen.

In his lifetime, Johnny Hallyday sold 110 million records and completed 181 tours. He made a historic sale of one of his records Mon pays c’est l’amour of 780,177 in one week. Johnny recorded Mon pays c’est l’amour while dying of lung cancer. Johnny has recorded more than 1000 songs. He amazingly adopted American Rock n roll style of music. His stage presence captured the French imagination.

Unlike other famous people who love flashy cars, he was an avid motorcyclist. Johnny frequently took long trips on his motorcycle from the desert of California to his home in Los Angeles. At his funeral service, nearly 1000 motorcyclist took part in the procession in honor of the late superstar. He had a devastating motorcycle accident.

French president Chirac recognized his contributions in promoting French culture in 1997 with the Chevalier of the Legion d’Honneur.

Be the first to review “Sophia’s World” Cancel reply